LoL: Riot applies a big change to Akali that makes her have things in common with Viper and Aloy

Most of the major changes in League of Legends relate directly (spell changes) or indirectly (map changes like plants, elemental dragons) to gameplay. However, anyone playing Akali these days will find that she sometimes has nothing to do with it. There are adjustments outside of gameplay that are of great importance to the community.

We say this because it is her in-game voice that will be modified for all of her skins. Riot Games not only updates the 3D models with its classic reworks, but also seeks to offer a category voice for its champions. This adjustment is already on PBE and comes from the hand of a great actress known to all.

Please note that only the English version of Akali's voice will be changed for now. Riot Games has chosen none other than Ashly Burch to re-record her iconic catchphrases. This dubber got her first role thanks to her brother Anthony Burch, then writer of the game Borderlands 2. She is voiced by Ashly as Tiny Tina, a relatively minor character until the fourth DLC. This 13-year-old girl in the second game, she ends up being the protagonist of the latest installment: Tiny Tina's Wonderlands.

Since then she has shown her good work. She became the voice of Chloe in Life is Strange, Aloy the main character in Horizon, Cassie Cage in Mortal Kombat X, Chun-Li in Marvel vs Capcom: Infinite as well as Teppen, and finally Mel in The Last of Us Part II. She has won several Golden Joystick Awards and was also nominated multiple times for an Emmy (one of which she won) for her performance in Adventure Time, where she voiced her various protagonists.

In addition to this, she appears in the great Apple TV series Mythic Quest, in which she plays a tester for a video game company. Little by little she is gaining prominence in it, until she is a very interesting character. 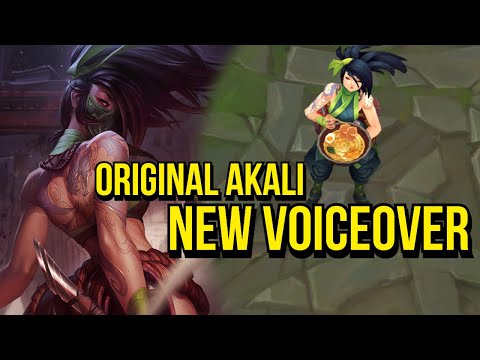 This won't be her first collaboration with Riot Games, as she already voices Viper in Valorant. The world of MOBAs is also familiar to her, as she plays Dark Willow in DotA 2.

Spideraxe (a Rioter) gave an answer. According to his statement, the goal is to make sure Akali's voice is the same no matter what universe she appears in. Recently announced in Legends of Runeterra, Akali is exported outside of the MOBA for the second time, after becoming one of the stars of K/DA and True Damage. She could also mean that she will appear in the fighting game Project L, which would not be surprising given her popularity in League of Legends.

However, there are other cases that disprove this logic. Not surprisingly, Miss Fortune has three different voices in different games, and that hasn't involved changes like Akali's. Perhaps it is a matter of time.